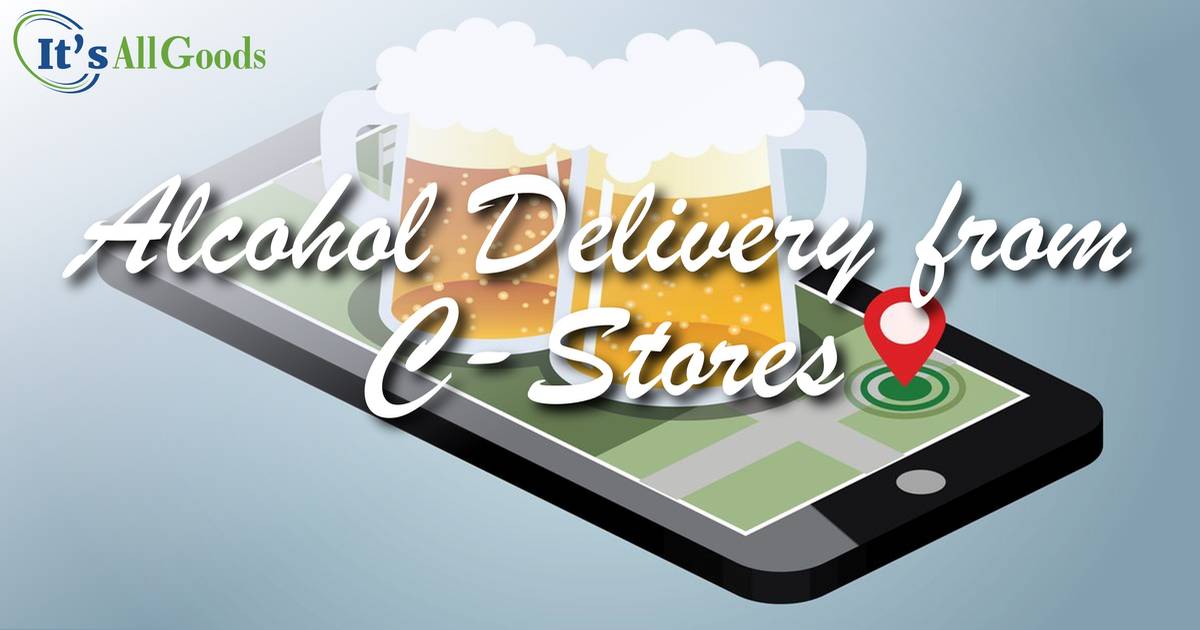 lcohol delivery from c-stores has been really growing over the years.  People are getting more accustomed to drinking from home and during the pandemic, a wave of delivery started.  People are also used to getting home deliveries and the convenience that it comes with has stuck on people’s minds.  Most people would rather have their commodities delivered to their homes rather than have to go to c-stores, make a cue and get them by themselves.  The new wave of deliveries is also present with c-store alcohol delivery.

Where Did It All Start

The COVID-19 pandemic meant that a lot of changes had to be made in the daily lives of people.  With lockdown after lockdown, the only way people could get the commodities they needed was through deliveries.  Major apps and companies filled this gap by creating convenient ways for delivery which had to be contactless.  The delivery meant that people could order online, a carrier picks up what they needed, and the commodity is dropped at their doorstep.  C-store alcohol delivery immensely grew in this period.

Numbers do not lie and the numbers show that alcohol delivery was really popular at this time.  The pandemic was a dark time, but it saw the rise of many practices and culture.  Alcohol was a major commodity being ordered and delivered.  The laws regarding alcohol delivery in most states was made lighter and even now as the doors are being opened, many states still are allowing the delivery of alcohol to eligible adults.

Nielsen data shows that between March and July, beer was the No. 1 growth driver in c-stores, growing by $1.4 billion.

Growth cannot be denied and the potential that alcohol delivery from c-stores has cannot be ignored.

Something that many people are usually looking to know is the delivery routine of alcohol. First, one should ask,” what c-stores deliver alcohol?” The answer to that is ambiguous. There are many c-stores that have joined in the wave of delivering alcohol. These c-stores follow in the usual routine of delivery and confirming the age of the person ordering alcohol. One of the major players is 7-Eleven and Instacart whose partnership recently grew to 6,000-stores nationwide. That means that more people can get their alcohol delivered conveniently.

The 7-Eleven and Instacart partner looks to obey all the laws of alcohol consumption when handling deliveries.  First, a person will order whichever drinks they want and the quantity. This can easily be done through www.instacart.com/711.  It is vital to know that the person making the order should be 21-years of age or older.  From that, a carrier will pick up the order and deliver it.  The 7-Eleven and Instacart partnership allows a short delivery time of only 30-mins or less.  When the carrier arrives, the person ordering will be expected to provide a valid national government ID.  Those are the simple steps needed in delivery.

Annual volume and sales from c-stores

It is without a doubt that the number of sales for alcohol in c-stores has been growing over the years.  The projectile shows that people should expect the growth to continue until it is a norm.  In Colorado for instance, The Colorado Restaurant Association said 87% of state restaurants made money from delivered cocktails. The Ohio Senate recently approved a bill that would let makers of alcoholic ice cream ship their products to convenience, grocery and liquor stores. The laws surrounding c-store alcohol delivery are being loosened all over the board driving sales up. The future is bright in terms of deliveries.

The technologies being put to use in c-store alcohol deliveries aren’t at all complicated.  Existing delivery technology was applied and minor adjustments are being made depending on the company that is making the deliveries.  One of the major places that people can make orders from is websites and from apps. For instance, the 7-Eleven and Instacart partner allows people to order from a section of their website.  Ordering is simple and people can track their orders as they wait in the comfort of their homes.

What c-stores deliver alcohol?  There are many big players in the alcohol delivery from c-stores.  The 7-Eleven and Instacart partnership has delivered one of the biggest players as they have over 6,000 c-stores doing deliveries.  However, they only deliver alcohol in seven states namely, California, Florida, Idaho, Illinois, Missouri, New York and Ohio, as well as Washington, D.C.  Another major c-store player involved in the delivery of alcohol includes Drizly.  The Boston-based alcohol delivery platform said that sales increased about 400%.  It is expected that more c-stores will become involved in alcohol delivery. It is beneficial to both the customers and the convenience stores.

The big question remains, what should be expected in the long term.  Such ventures require a lot of investment and knowing the potential will be very helpful.  The long-term outlook, nonetheless, is very promising.  This can be credited to the actions that state governments are taking.  The laws on alcohol delivery were made lighter during the pandemic.  Lockdowns are being lifted all over and people are now going out more.  However, the laws on alcohol delivery allowance are being extended in most states.  Consumers also are still showing preference to ordering alcohol from the comfort of their homes.

Across the country, more states are making alcohol takeout and delivery permanent as stay-at-home edicts are lifted. Illinois has passed a bill that would keep its emergency to-go order for alcohol in place for an extra year, while New Jersey has added six months after the pandemic ends to its alcohol delivery law.

Washington’s Mayor and the Governor of Texas are looking to make the change permanent.  Things are looking promising for c-stores and their allowance to deliver alcohol.