Boost your Success at Trade-Shows

Are Trade Shows Worth It? 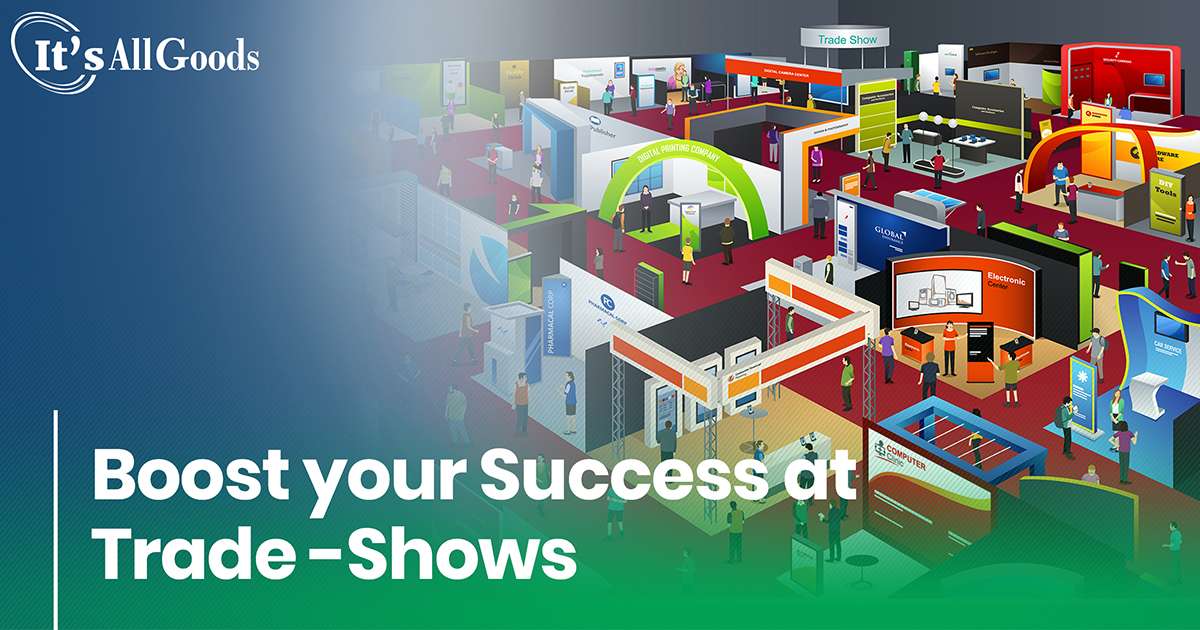 rade shows are events held to bring together members of industries, generally taking place in large convention centers and lasting for multiple days on end.  They allow for businesses to display their products or services to others in the industry, encouraging trade and B2B collaboration in various areas such as food, technology, and healthcare.

However, there are costs involved in taking part including paying for the trading booth itself, the cost of electricity for the stall, the travel to, from and during the trade show, and other incidental expenses during the event.

This leads many to wonder, are trade shows worth attending and are they deserving of the hassle involved?  Well, it depends.  At the end of the day, trade shows are worth going to as long as sellers do their research beforehand and they aim to make as many connections as possible while they are there.   Yet, sellers can do various things to improve trade show performance and their chances of success as explained below.

Generally, industry shows are places to meet and connect with others through networking events, Q&A sessions, shows, and meetings.  Try to go to as many sessions as possible and push the limits by talking to new people every day.

Doing so broadens the horizons for attendees by enabling sharing ideas, making new friends in a similar line of business and most importantly, obtaining qualified leads.

Approximately 91 percent of all trade show attendees claim that shows are ‘extremely useful’ to their product and service sourcing efforts.  This statistic implies that trade shows are worth attending for most business owners.

This is especially the case for new organizations who may be attending a trade show for the first or second time.  It’s important to get out there and build on any previous trade show experiences where many feel shy or awkward on their first time around.

On a similar note, reaching out to attendees both before, during, and after the event can massively improve the chances of seller success.  This could be done via email, social media, or on a business website.  Traders cannot rely on attendees simply waltzing past their stores and stopping.

Make the first move and ask sellers to come to the stall itself.  Then follow up with emails of contacts or leads that were made afterward to make a lasting impact on potential clients or business partners.

Have a Clear Aesthetic

Another way in which sellers can improve trade show performance is by having an aesthetic for their booth.  Unfortunately, most people can say they’ve seen a plain awful stall at some point or another.  But what actually makes a good stall?

In essence, the physical stall is an extension of your brand.  Ensure that your trade stall matches the energy and aesthetic of your brand or product.  If someone is selling technology, people expect sleek and minimalistic stalls to play into the design of the equipment being sold rather than bubble-gum pink decorations and immature signage.

According to Display Wizard, an eye-catching stand at trade shows is the most effective method for attracting attendees according to 48% of exhibitors surveyed.  So, traders should use their common sense when dressing their booths including a backdrop, tables, chairs, and preferably a video that onlookers can watch.  Just don’t go overboard.

If sellers don’t succeed in one trade show, that doesn’t mean they won’t at the next one.  Currently, there are around 13,000 trade shows across the US per year.  This gives traders plenty of opportunities to go to multiple shows if they want to, or, just attend the same show again next year having learned from their previous errors.

Simple changes could include altering the aesthetic of the booth, taking a new team of staff to work with, starting the planning process a month in advance, or having more of a social media presence, improved staff preparation, etc.

Just don’t go back to the same trade show with the exact same strategy as last year and expecting things to change.  This will most likely waste your time and money.  Thinking ahead will give you the most chance of success.

Are Trade shows Worth Attending?

Asking whether a trade show is worth attending is a valid question.  Before deciding whether to attend a trade show, consider the following logistical factors first.  If sellers have enough funds to cover their attendance and other associated expenditures such as their display - then the show may be worth it.

If they have done sufficient planning and understand how many potential clients they will need to close deals with in order to break even or make a profit, then a show may be worth it.  Trade show success is also relative to the business involved.  A smaller stall that closes one sale may make a trade show ‘worth it’ for that business whereas others have higher revenue expectations.  Keep in mind personal goals and expectations.

Approximately 91 percent of all trade show attendees claim that shows are ‘extremely useful’ to their product and service sourcing efforts.  This statistic implies that trade shows are worth attending for most business owners.  Don’t be put off or intimidated by them.  They are an amazing opportunity to showcase products, meet like-minded people, and enhance prospects.

Realistically, trade shows are what you make of them.  Traders having done no research or planning will most likely fail to make any profit or good connections.  Yet, there is always room to improve trade show performance so don’t give up too soon.

Always aim to progress from any previous trade show presence.  Businesses and potential clients could remember from last year and be impressed by a trader’s development.  Or, if this is a trader’s first show, be sure to make notes of things to improve as well as what other successful sellers are doing.  This will all help with the planning for any future trade shows.